First, I want to say how delighted i am that there is a majority of Irish people who are willing to allow others to live their lives and get married.

In Ireland, there had over many years, been various court decisions that interpreted the Irish Constitution to effectively mean that marriage was between a Man and a Woman. This meant that any law that allowed for Equal Marriage may have faced, and lost, a constitutional challenge. This is why we needed a referendum.

So I can understand that people may want the whole democratic process of letting the people decide might be attractive; it however is something that is problematic.

I recently listened to the first two books of this series on Audio book. And i am in truth blown away by the level of mastery shown within the books.

The Stormlight Archives is a series from Brandon Sanderson, whose other work i have enjoyed. If you have not read any of his work, i recomend that you start with something simple like the Final Empire, or maybe Elantris. Both are excellent books, Elantris suffers from author trying to be clever but makes up for that by been a single volume Fantasy novel.

The Storm Light Archive is, I think, going to be Brandon's Masterwork, the piece of work that will gain him the right to call himself a master in the field of fantasy. I know some already consider him that, and i am probably one of them, however the quality of the first two books will make it difficult to deny him, if he can keep that quality up for all of the books.

I am not going to go into deep detail, as this is beyond the scope of my ability, however what struck me most about the books as i listened, as little bits were revealed, was the depth of the world around the characters. This isn't a simple oh look at these three or four countries that make up the world. While we are focused on one culture, we see hints and mentions of so many other places and culture that are going to add to the world.

If you are a fantasy reader, i do recomend that you consider adding this series to your list. Though warning, it is a slow go for this, and i suspect it will be at best one book every two years for the series, which is apparently ten books long. So if you want to wait i do understand. Go read the Mistborn Triology's instead!

So I only got to see this on Sunday when I go back from Russia, and I had a few thoughts.

Am going to avoid a lot of things, but will talk one thing I liked and one I did not
( Collapse )

I know there is a lot more to talk about, and there are some real issues, but well these are just some minor thoughts from me!

I have missed this place!

I was never much of a blogger, it has been nearly 3 years since my last post, and what I loved about LJ was the community that existed.

It was a place I could catch up with friends, however Facebook and Twitter took over those roles, and so I stopped using this site.

However, LJ does things simply that others never did, like making posts visible to only select groups or allowing each post to have a separate avatar.

So much of the fiction I wrote when last I was writing fiction is here.

Hopefully it will not be as long until my next post.

So in what is now becoming tradition i come to live journal to talk about Octocon from the con runners perspective. This is mainly in an attempt to have some transparency going on from our side to people who are interested in Irish Fandom and Octocon.

Looking around there is still a lot i want to get done, and so i am continuing on until next year. However it should be noted that there is no Octocon in 2014. I am planning on been on the committee for 2015, however i feel at that point the committee at that point should have full reshuffle, and move roles around to make sure no one person becomes to tied to a role. Three years in a role can be a very long time.

Still i think we did good, and hopefully next year we can grow our membership to over 200.

A quiet night at home.

I wandered into the cinema, with my very useful cineworld card, and watched the Amazing Spiderman.

Its actually very good. better than the Tobey Maguire ones. They have created a smart and funny spiderman, who is full of the wisecracks. This was missing from the earlier ones.

They are clearly thinking ahead for a series, and so i am looking forward to more of that!

I am now starting to do my Prep for the Trip to Worldcon at the end of August. Need to decide about flyers/ribbons/shotglasses that we may produce, which of course have a lead time.

Then i am going to need a look at new clothes. My weight loss has meant that some of the clothes i own have been worn for awhile, once while i was ballooning up and then when i came back down. I was holding off buying new clothes, as i intend to loose more, but am currently pleatued in size, and suspect i will be, even if i resume weight loss.

Not sure where the money for the clothes will come from, as i am still outside the normal range of mens clothes, so have to go to specialty stores, which are more expensive. if i can loose another 4 inches i should arrive at teh top end of standard mens wear...

Its a hello, i haven't been here for a few weeks.

Nothing exciting has happened....I have been Reading, trying to get through my Hugo REading list. a couple of more stories, two books and a pile of Graphic Novels.

Work is busy and has me working on so many projects i am loosing track of time during the day. So that is fun, better than spending eight hours surfing the internet. I have a project finished, well my part of it is finished. I am doing installs on a server so that it can act as our pre-release test server, and as a model for our live servers. So lots of installing software, and then going backwards as i realize what i did wrong. am almost ready, and then i pass the deployment over to work mate to test to breaking point!

After that comes the much bigger project, that will be even more.

But i digress away from whatever i am talking about to go into far to much detail about what is going on in work.

I am heading to This years Worldcon in Chicago, haven't been in Chico since 1986, so thats what 26 years, wonder how its changed, and would i really notice as i wasn't very observent back in the day.

Hopefully i may even have something exciting to report from Chicago, but i will probably forget for weeks and then come online and say that i had fun, like most of my convention reports.

So i habve done something this weekend i haven't done in a LONG time, i read a lot of books.

The first was Liar's Poker by Michael Lewis. Considering it is a topic i want to know as little about as possible, but are an important part of how the Irish economy has fallen apart, I.E Bond Markets. It is well written, and an absolute Page turner. It is the, apparently true, story of a guy who got involved with the bond markets and how it made him a lot of money, and well how other people lost a lot of money. When the book was written in 1989 a lot of the things that are explained in detail in the book where still not common knowledge, and while that has changed, it gives a good view of how the world started on the path to where we are now.

Then i moved on to Read "Among Others" by Jo Walton. which i was supposed to read weeks and weeks ago for Book club, but never did. it however made the Hugo shortlist, and as one of the thousands of people with a Hugo vote i am doing my best to least read all of the nominees. The work is told in a diary format, with lots left of off the page. I can see why it is considered to be one of the top books of 2011, and would suggest you go read it. I will probably put more thoughts into my report on the bookclub website.

Then there was "Double Vision" by Tricia Sullivan. The book is weird and awesome and in truth i have no idea what happened! It is full of great ideas and i suspect a lot of the ambiguity is left in so that each reader can make up their own mind as to what happened. I am glad that i finally finished this book, as it has sat half read on my desk for awhile. The main problem with the book is that it took awhile to get into it,however once in its hard to stop.  This was my second attempt at one of Tricia Sullivan's book and i shall eventually return to Light born, as the language and concepts are a bit strange.

In the end i think its weird that all the books i read this weekend are told from the first person viewpoint! also the book that i found most incredible was the non-fiction book as it is the one that most stressed the rules of logic and common sense. the Fiction books made sense within their own world! However that is usually the way

It has been fun to be back in Dublin. Relaxed. I had decided to take the whole week off of work, instead of just those needed for the Zagreb Trip. So it was good to just sit back and catch up on sleep and ease back into the Dublin life.

Thursday was a trip to see Avengers Assemble. A film i enjoyed on nearly all levels, and it has attained the status of Good. i hope to get to see it again before it leaves the cinema. After that i went to visit my parents, to say hello and to get some stuff out of Storage!

Friday, i went out to the Star Wars show out in City West. it was pretty much what i expected, and so i only stayed around for less than an hour, before i was on my way, back home to read!

The weekend has been about relaxing and reading. Basically ideal fun time. Though my room is mostly clean, and a more organised in preparation for the big Re-Org that shall take place tomorrow! it shall be fun, and hopefully the room will be a better space after it.

anyway, one more piece of stuff from Zagreb, its a video recorded at the event. While a lot of it is in Croatian, if you skip to 5.20 and watch on, i appear for a short while, and do not make a total fool of myself....

Today i am going to share one set of photos!

St. George and the Dragon: 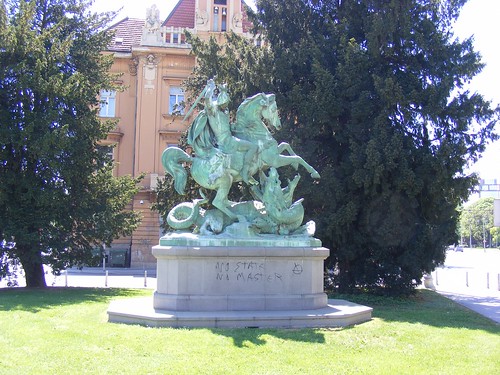 I took 9 photos of this statue, so go to flickr, and check them all out!
Collapse